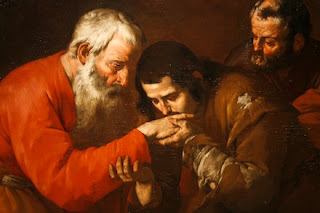 I am really going to have to be more careful about choosing the time period when I come home for vacation each year and perhaps vary it a bit more. Thanks to the kind invitation of your pastor, I find myself here in Salem two years in a row on Father’s Day. My worry is that Father Martin might start talking about an unbroken tradition since time immemorial and expect to see me every year on this date! Either that or all the dads in Salem will come to expect me on this date. Not a bad thing, but I am just saying.

At any rate, best wishes to all the dads here present, as today we thank God for our earthly fathers, both the living and the deceased. We pray fervently for those who have preceded us in death and for those still on this earth we pray they might always better reflect the love of God our Heavenly Father and help to draw us their children into the mystery of the Eternal One, Living and True, from Whom all that is draws life and being. Happy Father’s Day!

To my way of thinking, on this the 5th Sunday after Pentecost, St. Matthew’s Gospel presents us one the toughest daily challenges which is ours as Catholics and that is: living reconciled with those who are given to us in this life. It is a great challenge because it does not depend upon one side alone; it is very much a two-way street as these two lines from the Gospel show:

People who live in the real world often know better than some of us clergy and understand quite clearly the import of what the Lord Jesus is demanding of us with these words “…leave your gift there before the altar and go; first be reconciled to your brother or sister…” You and I might just deceive ourselves into thinking that what Christ commands we can accomplish by personal resolve, by the force of our own will: “…gee I’m sorry, no, honestly I am!” First be reconciled to your brother or sister: how often have we encountered among family, extended relation, friends and neighbors, situations which just don’t resolve themselves with an “I am sorry” no matter how sincere? Reconciliation has two sides to it and if the other party is unwilling, it is almost as if the gift or sacrifice is destined to remain permanently sitting there on the altar waiting to be offered until the difference between us finally be resolved.

In terms of the importance of reconciliation, which is intimately bound to the two great commands of love of God and neighbor, another very familiar passage comes to mind: sacrifices and oblations you want not, holocausts and sin offerings you sought not, but rather a heart ready to do your will, O God. And what is God’s will? That we would put on His mind, that our hearts would be one with the heart, with the love of Christ. What about that estranged brother or sister, that workmate or neighbor? I can freely say I am sorry and in a big hearted way I can even forgive. Right? Great! But Christ’s point in today’s Gospel is how does the other party feel towards us. Do they still hold something against us and keep their distance? As prudent as it is to avoid conflict by keeping our distance, it does not seem to me that the Lord is going to let us off the hook with a simple, “Well, I’ve done my part”. For admission to the altar of sacrifice, for participation in the oblation which the priest offers on our behalf something more is required. I am not the judge of when satisfaction has been made for past transgression. I don’t determine myself when I have done enough to be admitted to Divine worship.

The Lord Jesus is being eminently fair in so far as He promises eternal damnation to those who refuse to forgive, who express disdain for the other, even if our differences don’t go beyond calling that brother or sister a fool. Nonetheless, having wronged the brother or sister, or at least in some way being responsible for that resentment, I cannot force the other to forgive and be reconciled. God is demanding something heroic of us; the sacrifice, the oblation required of us must touch our very being.

I cannot help but think of the meditation by Thomas a` Kempis on the unjust condemnation of the Son of God before Pilate:

“LORD JESUS CHRIST, everlasting Joy of the saints, I bless and thank you for enduring that angry crowd’s loud and arrogant cry against you, as the people furiously shouted: Away with him! Away with him! Crucify him! How intense was the rage of that miserable crowd! How inhuman the cruelty of those chief priests and Pharisees! No fear whatsoever could deter them from killing you, and no reason could restrain them from shedding your innocent blood. Though the heathen judge was disposed to show some compassion on your behalf, nevertheless, the hearts of the people were so hardened that they demanded further brutality.” [Tylenda,  Joseph N. On The Passion Of Christ According To The Four Evangelists (p. 48). Ignatius Press. Kindle Edition.]

One of the great scandals held against us as practicing Catholics would be our failure to accept undeserved suffering and take earnestly Christ’s command that we seek reconciliation with our brother or sister before approaching the altar of God to offer our gift. Too little attention is paid to the condemnation which falls on the other who judges and holds us at arm’s length. That the forgiveness, that the desire to make up and place divisions aside involves both parties is clear. Sadly, those who rightly or wrongly see themselves as having been offended hold back out of a false sense of what is their due in justice. Angry with a brother, insulting a sister, classing somebody a fool: they all deserve hellfire says the Gospel. The thing cannot be whitewashed, without in imitation of Christ the humble sacrifice of my own very life the gift might as well remain on the altar.

My worthy and fruitful participation in the Holy Sacrifice of this Altar depends upon my heart. My expression of love for the invisible Godhead can only be corroborated by the love of the brother or sister whom I can see. The brother or sister who holds a grudge against you may be in the wrong, but even to the point of enduring gross injustice, we move first in Christ to mend the broken and wounded, to establish through whatever personal sacrifice it may cost that oneness of mind and heart which is the will of our Heavenly Lord for our worthy participation in that sacrifice which alone gives glory to God. ...sacrifices and oblations you want not, holocausts and sin offerings you sought not, but rather a heart ready to do your will, O God.

Posted by Thomas Gullickson at 5:19 PM No comments: