Immediacy or Genuineness through total Reliance on Christ and Him alone

(Samech) I have hated the unjust: and I have loved thy law. Thou art my helper and my protector: and in thy word I have greatly hoped. Depart from me, ye malignant: and I will search the commandments of my God. Uphold me according to thy word, and I shall live: and let me not be confounded in my expectation. (Ps. 118: 113-116)

I did not think I would be returning so soon to talk about the benefits that have come my way from embracing the old Office (yesterday), but here I am, because I cannot remain silent about a very important gain or recovery... gain is probably the better word, because I think we are speaking rather optimistically, at least in my case, about spiritual growth.

For all its petitions about confounding the enemy, about banishing evildoers, about vanquishing the foe, the full Psalter us unapologetically reliant upon the Lord of Glory. Prayed within the Church that immediacy to very human feelings and emotions translates eloquently into total reliance upon Christ, Who made us for His own and saved us from sin and everlasting death, by swallowing up death in His Victory upon the Cross.

In terms of the reform of the Office, after Vatican II, PC - political correctness (before it had been so labelled) robbed us of the full Psalter. The lists of inappropriate or forbidden verses were published. I can remember in college, when a very irate spiritual director would stomp out of our "evening curfew" compline on the weekend when a distracted hebdomedary let us read or chant the forbidden psalm with the verse "happy the man who shall seize and smash your little ones against the rock"... Yes, they are hard words and have always been such, never easy in any age. Apart from multiple patristic attempts to explain away the brutality with some allegorical or other interpretation, I always found the immediate bitterness of the words to be much more in touch with life. They also register the helplessness in suffering of a people who should be safe under God's mighty wings.

Why did those vicious unicorns have to disappear? But maybe more to the point, why did we have to stop hurting deep down and profoundly over our oppressors and somehow lose the need of turning them over to the Lord for judgment?  Emasculating the Psalter did little more than dumb us down. In a sense, the new Office made us "snow flakes" long before that was a term.

From the silence of the tomb on Holy Saturday there wells up for me a profound yearning not to be spared. As a child, every Lenten Friday, our whole parochial school went over to church to pray the Stations. We sang a popular setting in English of the Stabat Mater. The one verse went: Make me feel as thou has felt; make my soul to glow and melt with the love of Christ our Lord (Fac ut ardeat cor meum in amando Christum Deum ut sibi complaceam).

Maybe what I am living since embracing the old Office would have happened anyway. Would have happened without all the fervent and repeated petitions to vanquish my enemies. That is, maybe my longing would have been no less pronounced, no less acute, for Christ to triumph in judgment in His Glorious Rising from the tomb, where scribes and pharisees had placed a watch, a huge stone and seals.

No! Forget it! It is the full Psalter! It is a Divine Office much more adequate to this priest's needs and heart.

Posted by Thomas Gullickson at 6:12 PM No comments:

Nunc Dimittis - A Breviary Encounter of another Kind 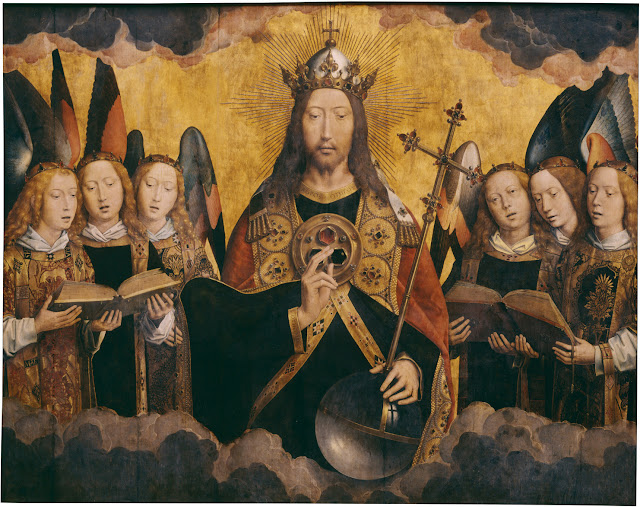 The numbers of monks and priests who are considerably older than I are rapidly diminishing (by "considerably" and "diminishing", I am referring to deaths among men who have seen 80 years of age come and go). I recently came across a solitary witness to the mindset of that generation and quote a passage from a disciple of Thomas Merton, talking about how he lived the Trappist Office in Latin as a monk and then not many years after was experiencing about the same in choir with English:

"After Vatican II, we began singing in English. A new frontier opened up. Images and ideas took the foreground of my mind in choir. Eventually, however, as familiarity with the English settled in, recitation became habitual and the old trials of patience returned. Sometimes I follow the meaning, sometimes my mind sinks to a random stream of consciousness, and sometimes I go blank. Verses during psalmody easily pass as an undercurrent casually observed from the lofty bridge of indifference." (Quenon, Paul. In Praise of the Useless Life (p. 12). Ave Maria Press. Kindle Edition.)

From my reading (especially of people like Robert Hugh Benson: "By What Authority?", "Come Rack! Come Rope!", "The History of Richard Raynal, Solitary", "The King's Achievement" [Benson, Robert Hugh. Collected Works of Robert Hugh Benson. Minerva Classics. Kindle Edition.]), I would like to think Quenon's is a minority report and that solemn liturgy (Office or Mass) was lived more in Benson's vein and not only. Whether England or France at the time of the Reformation, the witnesses exist to assure us that what was going on rarely had anything to do with recovering the faith or drawing closer the Christ. One dare not badmouth the Counter-Reform.

I bring this up because I think I am ready for a preliminary judgment on my own experience, having taken up the gauntlet of praying the pre-conciliar breviary in full as of the First Sunday of Advent. The old Divine Office and the Holy Sacrifice of the Mass according to the 1962 Missal are of a piece. I have all sorts of good things to say about this experience and no doubt with time I will find venues for sharing my joy.

It is only now that I understand why László Dobszay in his writings focused so on the Divine Office. I quote from "The Restoration and Organic Development of the Roman Rite", T&T Clark International. London. 2010. Chapter 15 - The Divine Office. pages 99ff: "The Mass mostly contemplates the work of salvation as a single comprehensive reality; the prism of the Office unfolds it in its manifest colour." (p. 99). Somewhere in his writings he pleads for a full restoration of the Latin Office, with, if or when necessary, abbreviations or dispensations for some clerics from some psalms or hours. But the scholar wants nothing less than the old Office.

As I say, despite my difficulties especially with the Latin of the hymns, I can now appreciate Dobszay's judgment on the Office. I have less understanding for his readiness to accept abbreviations or dispensations from certain hours, let us say, for secular priests. We're talking about private recitation of the breviary and I am convinced that perhaps, despite the effort required, the Office is not too long. It is doable if one commits to the approximate canonical hours and maybe concedes joining Prime to Lauds and Compline to Vespers if you eat at 7:30 pm like I do and consider "burning the midnight oil" as an enormity. Advanced age and the inability to sleep the night through has graced me with a Matins "solution", especially in the face of first class feasts with three nocturnals and, yes, nine readings!

Enough for now! In the midst of this Holy Triduum, this old man just wants to join his voice to that of Simeon in the Temple and proclaim that having take the Baby into his arms "nunc dimittis!" It is enough. No doubt, I will never have the joy of a full blown choral office in a monastery, or a chapter, or some other community of priests. Even so, I am terribly happy with what I have found.

My question, obviously, is what got into that older generation to make them so eager to jettison the old Office? I know that many had problems with more than the breviary hymns, but perhaps they never really understood the nature for their own life of the sweet burden of praying at all hours to the Bridegroom with the language of His Dear Bride.

Yes "Nunc Dimittis"! No turning back! I only hope that generations of younger priests might find their way to this something which allows of no boasting or flexing as sometimes communicated in accounts of "my holy hour"...

Posted by Thomas Gullickson at 6:55 PM No comments:

"On arriving at this place of penitents, the dwelling of grievers, I observed (if I am not too forward to say) that which the eye of most carefree people have never seen, and what the ear of lazy, amenable people has never heard, and what has not come to mind of the meek. It was to see such actions and to hear such speech as would lend God to pity, such deeds and motions as would readily bring His love for mankind." (Climacus, John. The Ladder of Divine Ascent (p. 32). Kindle Edition.)

In reading The Ladder of Divine Ascent, the most heart-wrenching and confounding passage for me describes the visit of Climacus to a monastery renowned for its place of penance referred to as "The Prison". What the penitents who placed themselves in this dwelling of grievers took upon themselves to suffer in expiation for their sins is beyond most folk. In our common history of the Sacrament of Penance we are usually given to understand that auricular confession, brought to continental Europe by the Irish monk missionaries, offered a whole new way to accommodate the vast majority of penitents, who could not be really classed as public sinners. "The Prison" does not speak first and foremost to mere externals. It speaks to the living and sincere penitential practice handed down from the Apostles and at least practiced by the desert fathers. It is not a holdover from an imagined "before" the arrival of these prudent Irish confessors, but speaks with confounding eloquence to the anguish of heart of those who recognize the gravity of their offenses against our loving Lord.

Living amidst diplomats in a very international circle, ambassador friends ask about the observance of Lent by Catholics wanting to know how it is different from Ramadan, or they ask why Orthodox Christians would also abstain from eggs and dairy during Lent. In comparisons, not only does the post-Conciliar Church come off wimpy in its rules for fasting and abstinence, but the "Climacan" anguish of heart seems nowhere to be found. That haunts me perhaps as much as the vision of "The Prison" in his book.

My prayer for myself and for fellow Catholics, overtaken as we have been by Holy Week again, is that we might be graced with a "Climacan" heart. May we find and abundance of anguished tears in the shadow of His Cross!

Posted by Thomas Gullickson at 7:07 PM No comments: