The Lord's Triumph - His Reign 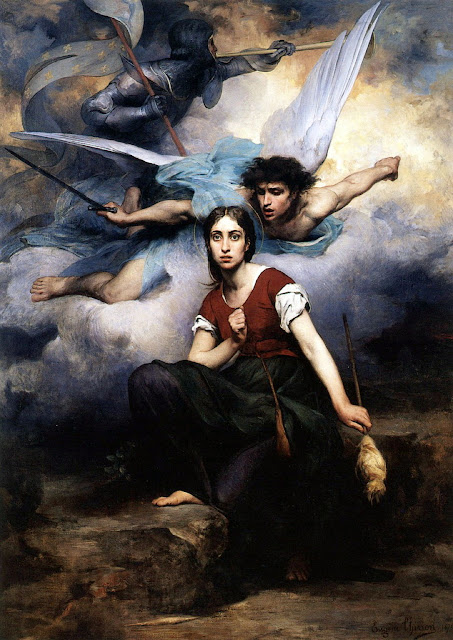 From childhood, my guess is that no life of a saint has left me more perplexed than that of the Maid of Orleans, of St. Joan of Arc. How did she end up burned at the stake? Why did instances of Church, really, seethe so with rage against this young woman, who gave herself over totally to the promptings from God which came her way? She was God's Hand, if you will, slapped away by the high and self-declared mighty.
I read a piece the other day by Anthony Esolen, marveling at the commanding influence which the holy nun, St. Hildegard of Bingen, had in the world of her day. Esolen roots her authority in the integrity of her life, in her holiness. It must be remembered that the powers that were in the world back then sought in her the face of God. She commanded in the Name of the Lord to Whom Popes and more authority figures in that Catholic world were ready to subject their lives.
Saint Joan of Arc, on the other hand, stands there despised and rejected like her loving Lord, He on the Cross and she on the burning pyre! Each woman represents an important moment or aspect of an ongoing struggle or battle for souls. Both were called to play a prophetic role in Catholic society. Hildegard seems to have had more success at leading at least to the extent that she did not end up burned at the stake, for calling her world to order. Neither woman was gunning for a priest's stole, a miter or a scepter and crown. They were prophets, in the mix, only because they had been drawn into it by the message of an angel.
The variable in the Hildegard or Joan of Arc equation seems to have been on the receiving end. What made the difference were those powers which were, those who called the shots in society, the ruling class, each day’s oligarchy, whether it clerical, secular or mixed. Like it or not, power in any bigger social structure seems to reside in the hands of a powerful few, sometimes clerics, sometimes blue bloods, sometimes robber barons or worse. The usual agent for social change or the catalyst for conversion to be confronted by the prophet is some sort of social elite, an oligarchy.
Since my time in Ukraine, I keep returning to ponder the scandal of oligarchy, which refuses to let folks live and won't settle for anything less than Naboth's vineyard, at the expense of the just man's annihilation. To the extent that you know the story of one of the world's failed states today, you have some notion of oligarchy's  power, its blocking force, rooted in its boundless greed and pretense.
Where has all this senseless violence and destruction in the US and elsewhere in the world come from? Does the rabble get loose on its own? Perhaps. One of the things which was all too clear from the senseless violence which held and still holds eastern Ukraine in its grasp was that terribly wealthy people were making sport of issues which could have better been addressed in respectful dialogue than in their promotion of mortal combat.
The other evening in Lucerne, I participated in a podium discussion on a new novel. Much time in the discussion was dedicated to the question of whether the Church had failed to play its proper role in the whole СOVID-19 crisis. Such discussions can be thought provoking, but are rarely good for that necessary insight which might put us on the path to life. Clearing away "givens", which are wrong-headed is as daunting a task as taming an oligarch. I refuse to reduce Christ's Church to just one more social agent, no matter how important, in a mix which is deemed multi and competitive for the attention of folks who accord themselves a pass on commitment and insist on performance over and against others in their own little imaginary market of ideas.
My petition or plea? Be holy as was Christ, as is the Triune God. Seek His Kingship in your life and wait to see what your world will do with you, whether you contribute as a Hildegard or they put you to burning like dear Joan of Arc. As the saying goes, God knows His own and will draw them to His right hand on the day of Judgment.
PROPERANTES ADVENTUM DIEI DEI
Posted by Thomas Gullickson at 3:20 PM No comments: 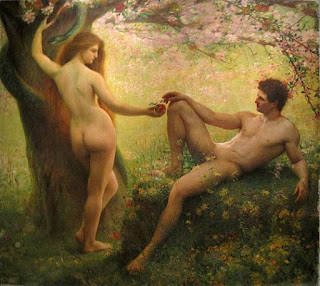 Rutler, George W.
Grace and Truth: Twenty Steps to Embracing Virtue and Saving Civilization
EWTN Publishing, Inc. 2018. Kindle Edition.
Here's a great little book, that will pick up your spirits. It gave me pause to think once again about the world in which we find ourselves. My two favorite parts among Father's twenty steps toward civilization are those treating the contrast between good and evil in terms of truth and lies and of innocence and naivete. While leaving you to discover this finely crafted collection of a series of Father Rutler's appearances on EWTN, I would like to share a thought or two of my own on that part of this almost dialectic between truth and lies as it plays out in our world.
Let this quote stand for the whole of Father's presentation: "Other ages have spread misinformation, but the twentieth century specialized in disinformation — the intentional dissemination of lies — and that is far worse. There is something diabolical in the very word “disinformation.” It really is a twin to moral death. For when the intellect turns on itself and uses its perception to contradict its purpose — namely, the spreading of truth — it becomes suicidal. The twentieth century, with all its achievements, nevertheless ended up confused and disappointed because it was still living the lie of Adam." (p. 16).
Living the lie of Adam! We know it in what many people naively seem ready to tolerate in their neighbor's or some university authority's insistence that there is your truth and my truth, but no objective standard representing the truth. It goes great for the world of appearances, sometimes known as Hollywood or a film industry labeled "the dream machine". But it is a lie and sane people all know that. There is an objective truth which comes to us from God, our Creator, who after Adam's lie, Adam's refusal to give God his due, sent His only begotten Son, Jesus, in the fullness of time. Jesus is the Way, the Truth and the Life.
Public discourse these days is supercharged simply because the general mismanagement of the pandemic visited upon our world was not confronted as it should have been. The "buck-thorns" of our society seized for themselves the mandate to wave over the trees, to use an Old Testament metaphor from the Book of Judges.
Here's where I could move from "Introduction" to a book-length harangue, but I won't, because it would probably do little to better public discourse. In a world caught up in living the lie of Adam, reasoned argument is usually countered with insult, dismissive comments, and character assassination attempts. So instead, rather unpretentiously, I will express the desire that people seek to return to that bedrock which is the truth which comes from God.
As a Church, we urgently need to reclaim our sacred space and return to prayer as well as divine worship in spirit and in truth. The sacrilegious use of masks and gloves, even tweezers for distributing Communion, have so disfigured the face of the Novus Ordo, that it may have to be abandoned with a certain urgency for the sake of faithfulness.
Look around at the countless examples of our world foundering under the dictates of relativism and try to tell me this is not a just punishment for our abandonment of the truth which comes to us from the God Who loves us and would save us, claiming us as His very own and for always.
PROPERANTES ADVENTUM DIEI DEI
Posted by Thomas Gullickson at 6:49 PM No comments: