Seek the Lord in Prayer

It seems to me that the Second Reading from this Sunday’s Office of Readings from A letter to Proba by St Augustine  entitled "Let us exercise our desire in prayer" enriches the theme laid out in the Old Testament and Gospel readings from Mass which exhort to total dependence upon the Lord in prayer.

“Why in our fear of not praying as we should, do we turn to so many things, to find what we should pray for? Why do we not say instead, in the words of the psalm: I have asked one thing from the Lord, this is what I will seek: to dwell in the Lord’s house all the days of my life, to see the graciousness of the Lord, and to visit his temple? There, the days do not come and go in succession, and the beginning of one day does not mean the end of another; all days are one, simultaneously and without end, and the life lived out in these days has itself no end.
So that we might obtain this life of happiness, he who is true life itself taught us to pray, not in many words as though speaking longer could gain us a hearing. After all, we pray to one who, as the Lord himself tells us, knows what we need before we ask for it.
Why he should ask us to pray, when he knows what we need before we ask him, may perplex us if we do not realise that our Lord and God does not want to know what we want (for he cannot fail to know it), but wants us rather to exercise our desire through our prayers, so that we may be able to receive what he is preparing to give us. His gift is very great indeed, but our capacity is too small and limited to receive it. That is why we are told: Enlarge your desires, do not bear the yoke with unbelievers.
The deeper our faith, the stronger our hope, the greater our desire, the larger will be our capacity to receive that gift, which is very great indeed. No eye has seen it; it has no colour. No ear has heard it; it has no sound. It has not entered man’s heart; man’s heart must enter into it.
In this faith, hope and love we pray always with unwearied desire. However, at set times and seasons we also pray to God in words, so that by these signs we may instruct ourselves and mark the progress we have made in our desire, and spur ourselves on to deepen it. The more fervent the desire, the more worthy will be its fruit. When the Apostle tells us: Pray without ceasing, he means this: Desire unceasingly that life of happiness which is nothing if not eternal, and ask it of him who alone is able to give it.”

I just finished reading Cardinal Robert Sarah's new book written in collaboration with Nicolas Diat: La Force du silence (Documents) (French Edition). Fayard. Kindle Edition. I have no doubt that it will be received and read by many with profound respect. Some may find it mystifying if not perplexing for its unqualified embrace of silence as the quintessence of the God encounter. He says nothing different from St. Augustine, but for those not drawn by the monumental silence of the Grand Chartreuse, the great Western Father of the Church from Hippo might be easier fare.

In either case, for me on this 29th Sunday of Ordinary Time the shared lesson and exhortation would be toward accepting and professing the absolute primacy of the Lord Jesus for the sake of the life of the world and for my own sake. The supernal sufficiency of Christ in His Person and His Teaching, and the unambiguous call for us all to place ourselves at the feet of the Master as did Mary at home with Martha and Lazarus, as this call can only be lived out in the worthy reception of the Sacraments within His Church, cannot be overstated, let alone denied.

"Desire unceasingly that life of happiness which is nothing if not eternal, and ask it of him who alone is able to give it.”

Of late and from some very unexpected quarters, from very pious people, seemingly, I have heard expressions of comprehension for the failure of young parents to seek the Lord above all else and share their quest for life in Christ, at one with His Blessed Mother, in simple prayer with their tiny children. Why has something so self-evident to my parents' generation become seemingly unattainable for many today? Spiritual combat, the notion of Confirmation making us soldiers for Christ, our prayer to St. Michael the Archangel to defend us in battle against the wickedness and snares of the devil... why so much complacency? Where are the spiritual athletes in numbers, who formed the basis of Christian culture?

To reference the reading at Mass, "Amalek" is on the move! We need to fight against sin and Satan; we need to be combative! More than that, we need to give ourselves over unceasingly to prayer; we need to confess the primacy of Christ. Like Aaron and Hur, we need to sustain Moses in his prayer to God for the salvation of his people and the defeat of the enemies of God. 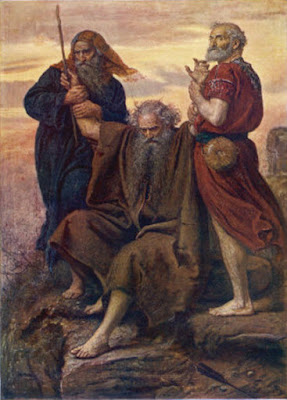 Posted by Thomas Gullickson at 3:02 PM No comments:

Everything in its own good time

Upon a friend's recommendation, yesterday for the first time I saw "The Island", a 2006 Russian movie by Sergey Korsakov,  presented in full length on YouTube with English subtitles. From watching and reflecting I have learned two things: the film has almost cult status in Catholic spirituality circles and my reading of this lovely and profound film is very different from some other people's, and people whom I very much respect.

To explain what I mean by the second point, I would just say that most aficionados are captivated by the mysticism of it all, when from my reading, at least, I think the point is another about the Christian life this side of Heaven in all its splendor. What is here so richly proffered should really bring us all to our senses (if I can be so blunt); it breaks through the complacency of the common fare too often served up as Catholicism today.

The film is really an icon of Mother Church in all her dimensions. For us Roman Catholics, it can teach the sense of Purgatory and of our need to do penance in this world for the temporal punishment we have incurred for our sins committed and forgiven by God, through the ministry of His Church in the Sacrament of Penance. For himself and for the life of the world, the elder does not tire of beseeching the Lord for forgiveness and remission of the punishment he so deserves; he prays constantly that he might be able to stand before his Judge when released from this vale of tears.

Cinematographically and with effect, the sins of monastic life are laid bare: the petty jealousies among monks, the vanity of the superior, the false consolation to be found and cast out, in a pair of boots or a blanket; even the pretension by his superior of offering the elder a special wood coffin as an act of piety is soundly rejected.

More interesting for me in the film are the elders encounters with lay people: the young woman pregnant out of wedlock, who seeks a blessing for an abortion, and receives a sharp reprimand from the elder and the menace of everlasting hell-fire; by him she is lovingly challenged to accept fully with love and hopeful joy the baby boy in her womb; the faithful widow, who is assured that the husband she thought dead so many long years is alive and waiting for her to come and close his eyes. The elder rebuffs her reticence to sell all and go to find him in Paris; he calls forth from her that unconditional love she was spared from practicing in her presumed widowhood. The elder heals the leg of the boy whose doting mother had carried him to the monastery in search of bodily healing; he takes the boy from her when she chooses leaving the monastery to get back to her job rather than staying the night to enable her child to receive Holy Communion the next morning to seal his healing. He drives the demon from the admiral's daughter and sends her to confession and Communion. The elder challenges her father to come to faith in the living God, the elder receiving recompense and release from this life in knowing that in the person of the admiral there stood before him the skipper of the boat he had thought to have murdered out of slavish fear.

My four years in Ukraine and the intimate contact with the Ukrainian Greek Catholic Church gave me an edge that I would not have had, had I watched the film earlier. Everything in its own time. One of the beauties of the Byzantine liturgy and prayer culture are the established forms. The only spontaneous prayer in the film was the one the elder solicited from the boy, encouraging him to ask the Lord for healing. All else were Psalms, Scripture passages, and parts of the Church's treasury of prayers. We need to return to depending upon Mother Church to provide us with words, maybe even Latin words, as most of the elder's praying was in Church Slavonic, another ancient liturgical language.

In the grime of all the coal dust and the ragged clothing of the elder, there is to be found what is starkly essential. In the bluntness of it all, the Genesis account of Cain and Abel strikes and challenges with an eloquence not found on lecture podiums or from pulpits. "The Island" is essential as our Catholic Faith is meant to be. It is lived out at home, in one on one encounters; it is something vibrant and alive, to be treasured in every way, shape and form.

I think we should turn ourselves over to St. Faustina and to the Divine Mercy Chaplet. In that simple repetition we may gain a needed sense of the Divine Presence and our hearts, please God, could turn to sincere repentance and contrition.


FOR THE SAKE OF HIS SORROWFUL PASSION,
HAVE MERCY ON US AND ON THE WHOLE WORLD!

Posted by Thomas Gullickson at 7:10 PM No comments: