I confess, I am a sucker for books reviewed and recommended by Peter Kwasniewski. Invariably, if they are available on Kindle, I buy them. This is the case with the new 2017 edition he prefaced of a classic:


This Angelico edition is a supplemented republication of the work originally published as Explanation of the Prayers and Ceremonies of Holy Mass: Taken from Notes Made at the Conferences of Dom Prosper Guéranger, Abbot of Solesmes. Translated from the French by Rev. Dom Laurence Shepherd, o s b in 1885. (cf. p. iv)

As opposed to other books of this genre, this one is a much more essential ritual commentary on the Mass of All Ages, nonetheless offering numerous insights into particular parts of the Mass, sometimes contrasting them to Byzantine ritual. Perhaps my favorite part of the short book was his treatment of the Canon of the Mass:

"The Preface being finished, the Sanctus is sounded, and the priest then enters within the cloud. His voice will not be heard again, until the great prayer is concluded. This prayer has received the name of Canon Missae, that is to say, Rule of the Mass, because it is this portion which essentially constitutes the Mass: it may be well termed the Mass by excellence." (p. 55)

If you won't take Peter Kwasniewski as an authority, accept my recommendation and read this commentary. What strikes me is that this book is over a hundred years old and has not suffered for the passage of time. Maybe that makes it timeless and therefore godly? I don't think I am saying too much. Tolle lege, tolle lege!

For those out there who can promote such, I think it would be great if Kindle would make available Gueranger's great multi-volume works: The Liturgical Year (a 15 vol. work available in English) and his Institutions liturgiques, posthumously published in French in 4 vol. Something on my wish list! 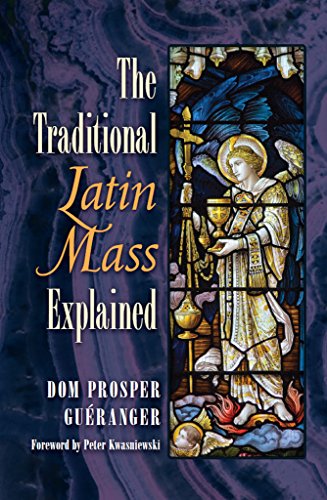 Posted by Thomas Gullickson at 5:54 PM