The Solemnity of the Epiphany of the Lord
Sunday, 6 January 2019, Bruder Klaus

“May the splendor of your majesty, O Lord, we pray, shed its light upon our hearts, that we may pass through the shadows of this world and reach the brightness of our eternal home.”

That is the prayer of the Church on this Solemnity. Epiphany! Christ manifest! The Wise men, the Magi, the three kings from the East, drawn by a star to pay homage to the Child Who brings with Him a new world order. He brings a new world order affecting time and eternity. He, Baby Jesus, is the be-all and the end-all, the alpha and the omega. Granted, coming into our world and into our lives as a baby, it is sort of like tiptoeing onto the scene. There are no trumpet blasts or earthquakes at His Coming. Yet He is no less God for that and it is no less true to say that He comes in splendor.

“Nations shall walk by your light, and kings by your shining radiance.” Epiphany!

And would you believe? Most folks in history and over time have just not been and still today are not a bit impressed by God showing Himself in time, as one like us in all things but sin! God in man made manifest! Even so, you and I both know that does not constitute a reason or an excuse for giving up on such great news. In His Coming at Bethlehem, Jesus provides us with all we need in freedom to choose Him, to choose His Kingship, His Rule over us, and thereby for us with Him to come out into the light.

Over two thousand years ago now at Bethlehem, the Angels from Heaven announced Christ’s coming on the scene to the shepherds, to the lowliest, to the social outcasts of the day, sort of like how we would consider homeless people. We really are talking about those most in need in the world, the shepherds in their day and the homeless in ours. Two thousand years ago, the star drew the greatest of this world, kings, learned wise men coming from afar to place their expensive gifts of gold, frankincense and myrrh at the feet of Baby Jesus. Epiphany: world shaking but not for everyone to see and comprehend! The shepherds and the Magi were privileged, as so are we.

Even back then, the Bethlehem innkeeper and his guests missed out on the Birth of the Child. Just outside the back door of the inn in that humble stable, the only begotten Son of the Father was busy shaking the world’s foundations by His Birth. King Herod missed out entirely on the implications of His Birth foretold in Scripture, of the coming in time of this King Who was no threat to him, but was destined to rule over peoples and nations for all eternity. Already over two thousand years ago, judgment had come upon the world; one only needed to read the prophet Isaiah correctly to be able to see and confess God in man made manifest.

“See, darkness covers the earth, and thick clouds cover the peoples; but upon you the Lord shines, and over you appears his glory.” Judgment is what choosing Christ the King, the Baby Jesus, is all about: separating the sheep from the goats!

Today, if we fast-forward two millennia from the day of His Birth, we can ask what if anything has changed in our world. For as unimpressed and distracted as many of our neighbors are and remain, I guess it would be fair to say that our world still has not heard, has not comprehended, is still desperately in need of this prophecy; we need to hear the powerful words of Isaiah. This Old Testament prophet needs to ring out once again and for us. Today, as much as ever, Isaiah needs to be heard and understood in the light of the Gospel of Jesus Christ.

“See, darkness covers the earth, and thick clouds cover the peoples; but upon you the Lord shines, and over you appears his glory.”

In some countries, the Epiphany is actually more popular than Christmas.

“Caravans of camels shall fill you, dromedaries from Midian and Ephah; all from Sheba shall come bearing gold and frankincense, and proclaiming the praises of the Lord.”

It is sometimes classed as the Christmas of the Gentiles. The Feast of the Epiphany shows the importance of the Coming of the Messiah for the salvation of not just God’s Chosen People but for all the nations. Epiphany brings light to the world. We are not talking about something nice, simply to notice or pick up on, but this feast relays to people of good will a joyous call to bend the knee before your Maker and Redeemer.

As I say, today we pay homage to the Child Who brings with Him a new world order. I don’t know about you, but I spend way too much time dealing with those who have missed out on the proclamation, with, let’s call them, present day “King Herods”, with people who have ordered their world as they see fit, who don’t give a care for the words of the prophet, and who would give no place to the Infant King. Would you believe that even within the Church of God there are people who will not bend, who just will not deal with that Baby born of the Virgin? Freedom calls for our subjection to this Child. Marveling, wonderment is the order of the day.

“See, darkness covers the earth, and thick clouds cover the peoples; but upon you the Lord shines, and over you appears his glory.”

I hope your Christmas holidays were not that hectic or that you did not find them boring. For people without faith in Christ, for people who do not believe or who are heavy burdened by self-indulgence, this can be maybe the worst time of year. That would certainly account for the anger of many nominal Catholics who believe some injustice is being done them because the Church does not fully conform to the world (equal opportunity employment, sheer willfulness when it comes to understanding and accepting God’s creative will). They do not seem to know the Baby Boy from the stable. They, like King Herod, seem to be threatened by someone so much greater than the plans they have set for themselves and want to impose on those around them. This Baby brings with Him a new world order and they would have none of it.

Epiphany has customarily been a time of house blessing for the New Year. May our families all be blest, may we learn to bow, to bend the knee to the Baby in 2019!

“May the splendor of your majesty, O Lord, we pray, shed its light upon our hearts, that we may pass through the shadows of this world and reach the brightness of our eternal home.”

That is the prayer of the Church on this Solemnity. May we be so graced! 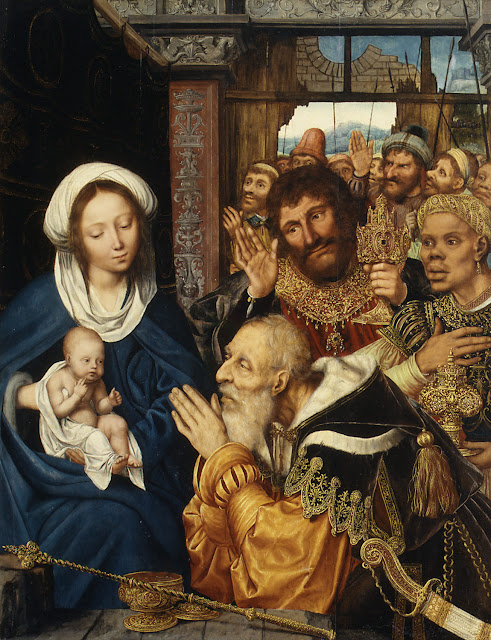 Posted by Thomas Gullickson at 4:26 PM