Glad Tidings to One and All 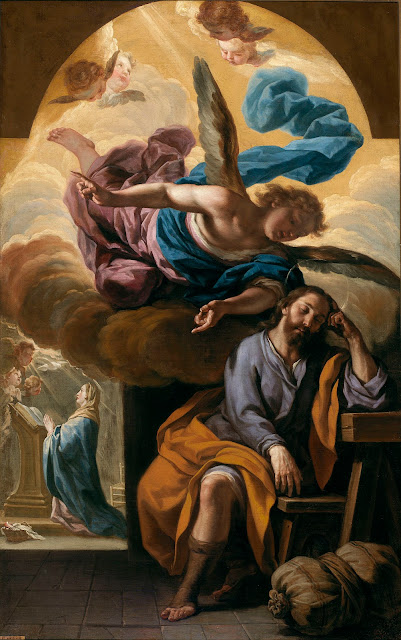 In the opening prayer for today’s Mass we read:

“Pour forth, we beseech you, O Lord, your grace into our hearts, that we, to whom the Incarnation of Christ your Son was made known by the message of an Angel, may by his Passion and Cross be brought to the glory of his Resurrection.”

We recite the same prayer every time we pray the Angelus. Its meaning is clear. Even so, I think that in the context of the Fourth Sunday of Advent we can dig a little deeper into the meaning of that prayer, in terms of our preparation for the great feast of the Nativity of the Lord. I think we should describe this Sunday as a last minute opportunity, now before Christmas, for (if need be?) a course correction in our lives as Catholics.

When I say a “course correction”, what I mean is that we should take this opportunity for an Advent meditation to help us clarify what we as Church are all about in the Mystery of the Incarnation of the Word of God. You see: some people just do not understand how God works in the world. When it comes to celebrating the great Feast of the Nativity, some people cannot seem to appreciate much more than the romantic side of the classic carol “Silent Night”, of the Christmas Crib and all. Others rationalize the Christmas story and refuse to accept the implications for their personal lives of the transforming power the Lord’s Birth at Bethlehem. In a sense, you might say that the celebration of Christmas falls short of its goal or intention in the lives of many Catholics. To be terribly provocative, let us say that it is nigh unto impossible to find people in central Europe who allow the Person of Jesus Christ to live in and through their celebration of Christmas and thereby allow Him, the Lord Jesus, to live and reign in their hearts.

We live in a world which calls itself Catholic, but which really does not pray much and which has no personal relationship to Jesus, born of Mary and placed in the manger at Bethlehem. Many people fail to make an effort even to observe the basics, like the 10 Commandments. They ignore the Precepts of the Church. The two greatest commandments, love of God and love of neighbor, just sort of fall by the wayside. With no seeming ties through personal prayer and attention to the only begotten Son of the Father, not much of anything either binds or reassures in the lives of many people today.

We must come to grasp more fully and live more intensely the message contained in the Christmas event: Christ born for us and for us given. Posing a question or two inspired by the Collect of today’s Mass could help us do just that. Which message is it that the Angel brings, regarding the Incarnation of the Son of God? Or maybe better: Which Angel is the prayer talking about? Is it only the Archangel Gabriel, who appeared to Mary at the Annunciation? Might it not also be the Angel, who spoke to the shepherds on that holy night in the fields near Bethlehem, announcing glad tidings and singing with the heavenly hosts “Gloria in excelsis Deo”? Or, from today’s Gospel, is it the Angel of the Lord, who appeared to Joseph in a dream? “…that we, to whom the Incarnation of Christ your Son was made known by the message of an Angel…”

Why for heaven’s sake do I wish to complicate things by going beyond the obvious reference to the Blessed Virgin Mary to whom the Angel Gabriel spoke at the Annunciation? I do it especially because of the Angel’s message to St. Joseph, as recounted in our passage from the Gospel of St. Matthew for today. I do so to make clear that indeed the message of the Angel to Mary concerning the Birth of Jesus, the message to Joseph, the glad tidings announced to the shepherds, are neither hidden nor exclusive, but rather destined for all: for you and me personally, and for all people of good will. A message destined for us too, to set us aside as different and favored by God. “…do not be afraid to take Mary your wife into your home.” The sublime unfolds itself in everyday choices, with our cooperation and at our eye level.

Already back in the Old Testament we get the message. In our passage today from the Prophet Isaiah talking to King Ahaz, he being no particular saint but as king representing the Chosen People before God: “Ask for a sign from the Lord, your God… the virgin shall conceive, and bear a son, and shall name him Emmanuel.” Ahaz balks at the Prophet’s invitation.

Our tradition tells us that Saint Joseph was an upright man, a good and holy man, a carpenter or handworker. I have no doubt that he was a man who said his prayers, who had a heart for God’s holy will and that it be done in his daily life. For that reason, especially since the time of the industrial revolution, the Church has held up the example of St. Joseph for ordinary folk. Like the carpenter of Nazareth so too we, no matter how lowly our station in life, we too find ourselves intimately involved in God’s plan for the life of the world. “Joseph, son of David, do not be afraid to take Mary your wife into your home. For it is through the Holy Spirit that this child has been conceived in her… When Joseph awoke, he did as the angel of the Lord had commanded him and took his wife into his home.”

From Isaiah again, sinful Ahaz, in a rather self-righteous and indifferent kind of way, wished to push God’s Prophet aside. Godlessness, for all practical purposes was Ahaz’s stubborn sin. Practically living without God, born of the Virgin, is the great sin of our age as well. A sign? “I will not ask! I will not tempt the Lord!” Nonsense! The problem is that Ahaz, like so many of our contemporaries, cannot be bothered by the Lord God Who breaks into human history, be it 2000 years ago at Bethlehem or be it by way of Mother Mary at Lourdes or Fatima. Too many folks just do not expect things or signs “as deep as the netherworld or as high as the sky”. Even some of your more active churchgoers cannot seem to get beyond certain institutional forms and attain a genuine personal relationship with that Child laid in a manger. As surely as God sent His Angel to Mary, to the shepherds, or to Joseph, He can enter into our hearts and lives, whether we be waking or sleeping makes little difference. The great event is announced by heavenly messengers to God’s little ones, to ordinary folk like you and me.

On the one hand, I am sure that neither Mary nor Joseph, and certainly not those poor shepherds, were expecting God or His Angel to speak to them. In much the same way, without any particular pretense, we should live as if it could indeed happen that an Angel could speak to us.

In the end, it would already be a great start if we would not push the prophet away as Ahaz did or that we not be lacking in faith as the father of John the Baptist was. In Luke’s Gospel, just before the account of the Annunciation by the Archangel Gabriel to Mary, we have Gabriel appearing and speaking to Zechariah in the Temple; Zechariah balks at the message of the Angel and has to hold his tongue until the prophecy is fulfilled in the birth of his son, the precursor of the Messiah. Neither Ahaz nor Zechariah could keep God from fulfilling His plan for our salvation.

Rightly understood, God asks us to partner with Him. As irresistible as His plan for us is, we are still called to respond positively to his invitation and give Him our “yes”. Christmas is at the door, but it is never too late to open our hearts and lives to Him Who comes, never too late for a course correction.

Posted by Thomas Gullickson at 6:40 PM