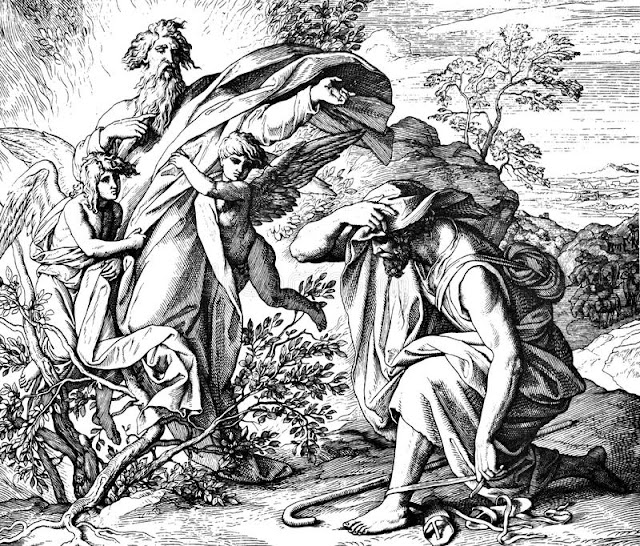 The Exodus account of Moses' encounter with the Living God in the Burning Bush is a classic for expressing what we mean by the fear of the Lord, by the reverential fear to be expected of God's chosen ones, from those to whom the Almighty chooses to draw close. In times past, the concept may have been more accessible to the comprehension of people generally than for the mainstream of Western society in our day. Even though Jesus would not in His own day, nor in ours, transport us back to the base of Mount Sinai, spewing smoke and fire, the casual which marks so much of today seems no less an exaggeration in the opposite direction. So many of the First Communion pictures I see posted on Facebook might show the communicant all dressed up, especially the girls in the white dresses. When a family picture records the event, it is not unlikely that the proud daddy might be standing there behind his daughter in a knit shirt and shorts, with sandals or sport shoes. The incongruity of the scene tends to jump out at you.

What we sometimes peg as casual is symptomatic for whatever it is in us, which seems to have banished the slightest comprehension of what is meant by reverential fear from the registers or keys in which we can sing of life and love. We see it in church going; we see it in family life and in interpersonal relationships. Married couples and families have lost fear as a category in describing their mutual respect. Talk of fear of the Lord, as well, does not rate much more than a hunch or a shrug of the shoulders. It would seem that thoughtless familiarity has banned from relations with both God and neighbor that respectful distance which should animate and enrich our relationships.

I remember from my own adolescence (mid 1960's!) two conversations with my father in which he professed to me, by way of witness and teaching to his son, his faithful and undying love for my mother. Dad did so speaking in terms of respect, maybe better of reverence, and of a reverence definitely shot through with fear. The one time I remember his anguished look after she walked out of the house and went to my aunt's when he raised his voice to her. Dad's reverential fear for my mother, his bride, inspired the remorse written all over his face, as he confessed to his oldest son, still a boy, his being in the wrong and his panic over how he would ever be able to make things right again. Of course he did, because the reverential fear was mutual and demanded as much from my mother as well.

Apart however from the existential, from our relations with family, friends and acquaintances, I am more concerned in sharing a thought or two about the reverential fear we owe to the Almighty, that is about the Fear of the Lord, that virtue listed among the seven gifts of the Holy Spirit: wisdom, understanding, counsel, fortitude, knowledge, piety, and fear of the Lord.

Lots of serious people of every age in the Church today are on the search for a recovery of reverence in our relationship with God Almighty. Not two months ago I was asked to address the Irish Confraternity of Catholic Clergy. They asked me to address them on priestly spirituality and reverence in the liturgy. The other day, I saw a video interview with a young man speaking to the issue of the preparations for the youth synod to be held next fall in Rome. He was saying that in his circle of friends, when it comes to liturgy, true reverence and a reverential atmosphere is something his generation strives to practice and seeks above all when it comes to searching out a Sunday Mass to attend. I still remember years back my sister telling me how impressed she and my brother-in-law were when their eighteen year old son expressed a preference for the quiet 8 a.m. Mass on Sunday morning over the youth liturgy on Sunday evening with guitars, percussion and what not. The young man had his ideas about where God was to be found and worshiped.

Where do you find reverent worship these days? I hope my readers will bear with me and refrain from shock and other theatricals, when I state that there is something ingenuous in the aspiration to be able to do one's duty to God and His Church by achieving a constantly reverent celebration of the Novus Ordo (NO) Mass. Just how do you go about doing that? Is it enough to clean up liturgical abuse, to sticking faithfully to the script (rubrics and approved liturgical texts), to order our priorities by going Ad Orientem or Ad Dominum, by forswearing the discursive tone and the running commentary in the order of Mass, by beautifying churches and choosing noble appointments for worship (sacred vessels and vestments)? All of this and more is what is meant by the reform of the reformed liturgy (starting with a purge of so much of what passes as liturgical music). It is all well and good, but more is required of us.

You might say that I am going overboard in taking a more absolute stance in favor of the Vetus Ordo (VO) than do the most vocal of the prelates (bishops, archbishops and cardinals) who speak to the topic of the mutual enrichment of the two forms of the one Roman Rite. Why? Simply by reason of how I understand the notion of reverential fear and how it should animate our worship and our acting! I will limit myself to giving you two indicators: optional modes of expression and the preparation of the chalice.

What is wrong with the rubric: in these or similar words? In one sense nothing and in another, everything. Discretion in the context of programmed choices (options) may not be disrespectful but it is neither awe inspired or awe inspiring. It is not conducive either to soliciting or to confirming reverential fear. Good! Well then just get rid of the options and establish one constant order of service. The question, of course, is whether (with the exception of Scripture reading) it is even possible knowing how most good priests go about celebrating Mass. How do you break priests of the habit of paraphrasing? Reverential fear demands no less.

Generally, in Novus Ordo (NO) celebrations in public we bishops have someone else, either a deacon or a priest concelebrant, prepare the chalice for us at the Offertory. Reverential fear would call for due diligence on their part in the addition of those few drops of water to the wine in the chalice... Sorry, but my usual distraction at that moment in the preparation of the gifts might be attributed to the careless or exuberant "glug, glug" of the water and the splashed up interior of the cup which is then handed me without remedy. Reverential fear? I think not. Is this behavior capable of reform, how and at what cost to all involved?

The premise is wrong for the needed reform of the NO, that is, for a recovery always and everywhere of the kind of reverence in public worship sought by people young and old. Tell me why therefore I should not conclude that the NO would seem to be incapable of reform. The alternative to cultivating the casual would be a contrite and convinced return to cultivating the sublime, and yes to do so out of a genuine fear. Love knows no less, if we are to be faithful, if we are to enter fully into His presence.

There's no turning back, you say. Such a proposal of a radical reset to the pre-conciliar form of worship would be to deny over a half century of experimentation and practice. I cannot help but ask myself whether it might not be that which the Bridegroom awaits. Is that not what genuine love shot through with fear, reverential fear, demands of me? "The fear of the LORD is the beginning of wisdom, and knowledge of the Holy One is understanding."

Posted by Thomas Gullickson at 6:43 PM