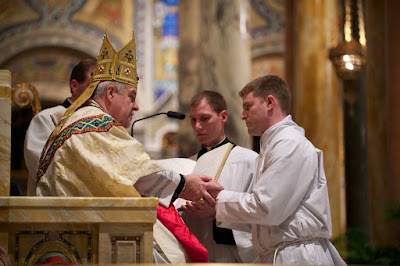 I thought it particularly important the other day to note on my Facebook timeline a OnePeterFive article from Peter Kwasniewski, Discerning the Priesthood: One Form or Two Forms? Why? Simply because of its very able description of the terms of the discourse as they stand today. What does that mean? Lots of things, I suppose.

For one, vocations discernment is the prime indicator of the vitality of Church life. Then too, there is ever growing consensus concerning the centrality of the argument in favor of tradition to any discussion of what defines vibrant Church life. I think that, despite the fact that absolute numbers of people and families adhering to the tradition still represent very much a minority report, we have reason to be more than encouraged by the vitality of many existing traditional Catholic Mass communities. They are the hope of the Church. Besides the encouragement we can find in the experience of youth pilgrimages like the annual one to Chartres, Sunday for Sunday our traditional Catholic Mass communities are today more than ever attractive and growing. In part, because of this promise of new life for the Church, I think we can register a change in the way young men today have to face the question of vocational discernment. In the light of the Kwasniewski article, let me briefly discuss, what I consider a key issue for men in love with the tradition contemplating priesthood.

At this historical moment, I believe we do indeed stand at the verge of a page turn, if you so will. Trad diocesan priests, who were so already during formation in the seminary in years gone by, were often so by mental reservation or dissimulation. Not infrequently and by their own admission, they lived the tradition, if you will, in the shadows. Peter Kwasniewski seems to believe those days have probably passed and I would tend to agree with him. The premises are plural which would encourage living in the light of day, but ultimately, it is a matter of seeing open discourse as doable and probably necessary AMDG.

I am not going to rehash his article or his dialogue with "Samuel", but pose a question the article inspires, and which deserves more attention. Namely, Question: Who calls to the priesthood? And, Answer: The Lord Himself in and through His Church calls to priesthood, and hence I am not the artisan of my own call. A vocation is a supernatural calling and it is discerned in the heart of the Church.

Dissimulation or mental reservation concerning the terms of one's call to priesthood was probably always grievously wrong, even if it simply represented an aspiration or will to choose exclusively the Vetus Ordo. So then in honesty, a man can only be called exclusively to the Vetus Ordo, if he is ordained for an Institute, a Priestly Fraternity, a religious order or community, which identifies exclusively with the Vetus Ordo and either is already recognized by the Church or comes to be recognized through application and discernment as provided for by law and custom.

The flip-side of the coin, to state it negatively, is that I cannot perceive my vocation alone and withdraw from the process of discernment, demonstrating mistrust of Mother Church or skepticism concerning her part in discerning a call which genuinely comes from God. If a man is from the outset convinced that his call is to living out the tradition in his ministry, that probably excludes a calling to diocesan priesthood as it is imagined or lived today. That may be a hard row to hoe, but no harder than was facing the resistance which families sometimes put in the way of vocations even back in the "good old days". We need to trust that if the Lord calls, He will clear the path. The road might be rocky and narrow, but it is presently outlined and assured within the community of the Church.

The issue is probably not all that black and white and no doubt those who see things clearly will also seek admission to a community which is Vetus Ordo, simply from their heart's yearning. I cannot imagine anyway that they are legion who rather seek a "promising" bishop and a diocese with space for this kind of growth, if one just keeps his head down in the seminary. For the health of the life of the Church and for the genuine happiness of the young man involved, I think it must be said, that living in the light is not only reasonable, but it is the only option.

Furthermore, as the Kwasniewski article almost intimates, it could very well be that the presuppositions for living out the diocesan priesthood as an ecclesial vocation are indeed breaking down. Not all that long ago, I had occasion to speak with a major seminary rector about how he sees his obligation to the dioceses who entrust their candidates for priesthood to him. I was perplexed by the uncompromising Novus Ordo profile he saw himself obliged to impose, ostensibly it would seem, for the sake of unity and discipline within the Church. What to do? Honestly opt out of that model in favor of existing seminaries devoted to forming men to the Vetus Ordo.

Another option for a diocesan bishop (not for a young candidate) would be to open his own seminary for Vetus Ordo vocations, building a house of formation solely for the sake of offering that type of exclusive service within his diocese... The very thought boggles the mind and throws up countless questions of many very different orders.

Let's remain then, for purposes of reflection and counsel, with the first idea and namely that for our day it might be sufficient and on the verge of earthshaking, if young men would abandon other paths and openly seek to adhere to the tradition within a recognized fraternity or institute so built. My prediction would be that within short order it would become evident that the page had turned and the Holy Spirit was breathing new life into Christ's Church.

As a boy and young man, I often repeated the prayer "Lord, make me a priest after Thine own Heart!" I pray that for others today!

Posted by Thomas Gullickson at 4:17 PM